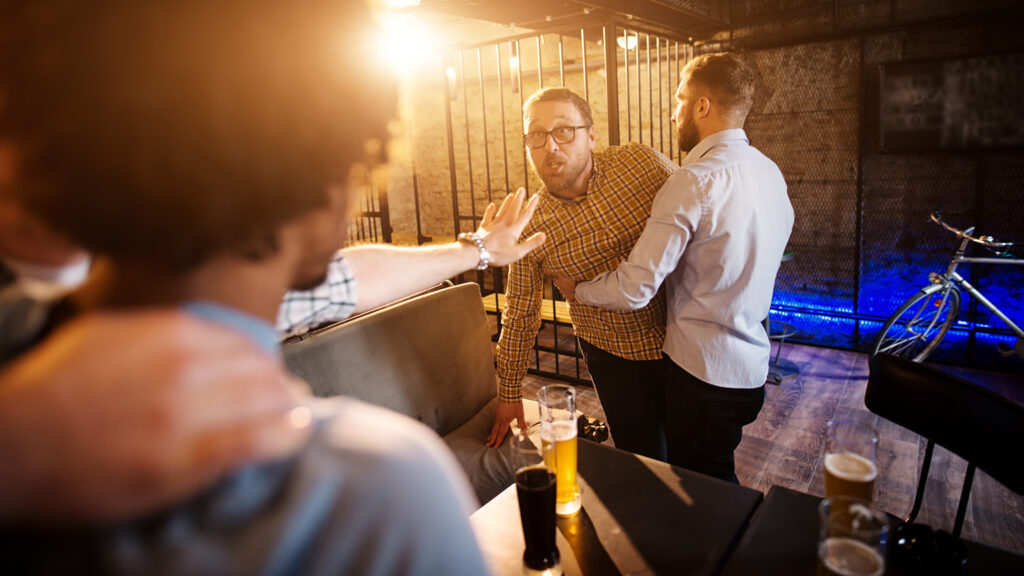 Having a few drinks is often harmless, but it doesn’t take much for those drinks to impact behavior. Among other effects on the body, alcohol decreases the activity in the prefrontal cortex, the part of the brain responsible for rational thinking. This lack of rational thought can create a whole host of problems for a bar or restaurant owner—most seriously, physical injury or even death. That’s why assault and battery insurance is crucial to protect your bar or restaurant.

This blog will explore liability, the difference between assault and battery, common incident scenarios, and the importance of insurance in protecting your establishment.

What exactly are assault and battery, and how do they differ? The definition may surprise you. Assault is an intentional threat causing fear of imminent harm, whereas battery is the act of harming someone. Neither requires a serious injury to have occurred. In fact, emotional harm is considered assault. Serving alcohol increases the risk of these situations occurring. Even if the instigator consumed alcohol at another location, you could be liable for their actions.

Here are some common events that are covered by assault and battery insurance:

Many, if not all, policies provide coverage against physical altercations on the premises. This scenario might include injuries to bystanders, physical damage to your property, or excessive force used by your security.

Emotional trauma to victims or witnesses

Coverage isn’t exclusive to physical violence. Many policies protect against verbal altercations, such as threats, leering, or name-calling. Coverage might extend to bystanders who sustain emotional trauma.

Muggings or other confrontations after leaving the establishment

Muggings or similar altercations that occur in your establishment or on your property also fall under the umbrella of potential liability. While there are many factors to consider when processing a claim, your policy often covers these events.

Assault and battery aren’t exclusive to fights and emotional damage. A comprehensive policy will also protect against sexual assaults and harassment claims.

Liability for assault and battery incidents

First and foremost, it’s essential to understand that as a bar or restaurant owner, you have liability for altercations in your establishment. If your customers become impaired and commit assault or battery, it’s an easy case to make that the alcohol was responsible for whatever happens afterward.

In an extreme example, a Texas jury found a bar liable for a drunk driving accident that killed two people. The jury awarded a $301 billion judgment, the largest ever awarded. The case should be a cautionary tale to restaurant and bar owners that they will be held responsible for the alcohol they serve.

A bar in Illinois learned this lesson the hard way. After leaving the bar, a patron was shot and killed in the establishment’s parking lot. The victim’s family sued the bar, and the bar tried to seek coverage from a general liability policy. The claim was denied because of an assault and battery exclusion, leaving the bar exposed.

To adequately protect your business, you must ensure that your general liability policy does not include this exclusion. If it does, assault and battery insurance is critical for your complete protection.

Who needs this coverage?

In short, any business that sells alcohol should have assault and battery insurance. You may be especially vulnerable if you have heavy foot traffic or regularly serve a large volume of customers. Crowded spaces and patrons bumping up against each other can be triggers. It’s also important for those who have security staff or bouncers. While removing an unruly patron, injuries can easily take place.

Unfortunately, no matter the precautions you take, you’re still at risk.

While you can’t eliminate that risk, you can protect yourself with assault and battery insurance. McGowan Program Administrators offers highly specialized coverage options designed with your unique needs in mind. Our Restaurants, Bars, & Taverns Insurance provides coverage for various situations that may occur in your business. Get in touch to learn more about this program and discuss your unique insurance needs with an agent.